We woke to a cool and misty morning at our mountaintop campsite. The kids snuggled in and we sat outside on our blue tarp porch drinking our coffee and taking in the foggy view of trees, trucks and other RVs. These are our nearest neighbors, who have been living here for 3 months while one of them finishes a job on a nearby pipeline project. Really nice people, who helped us get set up and avoid any number of first-night mistakes we would have otherwise made. 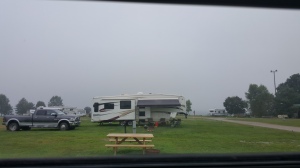 Soon enough, we headed out to explore Pittsburgh. It’s a great city, crowded with old beautiful buildings and a maze of hilly roads that all seem to lead to a bridge and a river. Among those buildings is the Cathedral of Learning, which has at least two dozen classroom-like rooms reflecting the architecture and learning philosophy of various nations. Here’s the formal setting of the Austrian room: 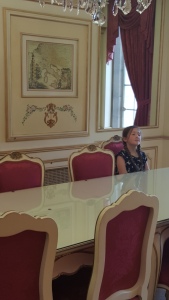 And the Turkish room, intentionally set up in a square, which is meant to convey a sense of equality–no one sits in front or behind anyone else.

The Japanese room was more like a traditional U.S. classroom, which made for a good impromptu lesson on how to lecture.

The kids caught on quick: 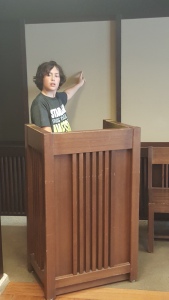 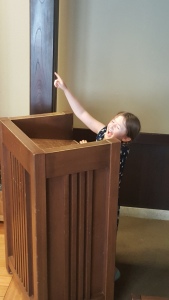 Right across the street is the Carnegie main library and the Carnegie Natural History museum (Andrew Carnegie loved not just libraries, but also dinosaurs). 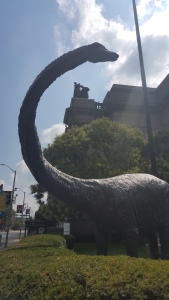 The library is full of modern amenities, but also has plenty of reminders of its earlier days.

Lunched on french-fry filled sandwiches at Primante Bros. Then headed to the Duquesne incline. It’s a short, steep roundtrip ride that creaks and jolts like a wooden roller-coaster but gives you a terrific view of the city at the top. The whole thing terrified me so I only got a picture at the bottom:

Next was the Carnegie Science Center, which you can see from the top of the incline right across the river. We could have stayed longer but it closed at 5pm so we headed to find our dear friend, Karen, who was meeting us at a place called Church Brew Works. Pittsburgh has a surplus of Catholic churches so this is one of many that has been sold and converted. No sermons at this alter, just beer: 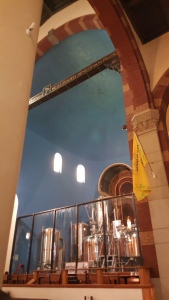 Then a short ride in the toad back to our campsite. Good night, Pittsburgh!