Glaciers, Millers, and Bears, Oh My!

Leaving Butte, the horizon was covered in clouds and in some places you could see sheets of rain over the mountains. But the air was still smokey from wildfires in the north and west and it seemed all of Montana was cancelling events due to the poor air quality. When we got to Missoula, we went to the mall and stayed indoors so long we became UM Grizzly fans (Elian now has a GRIZ shirt; G declined the football gear and walked out with a pair of Bearpaw boots that she has worn every day since). As we left Missoula, there were no views of the mountains that surrounded us, no way to distinguish the smoke from the clouds. Montana’s big sky was just a big sheet of gray.

We camped that night in a national forest outside of Anaconda, MT. The campground host welcomed us to the small, wooded and near-empty site where he’d been since May (his 11th year hosting that campground). It was a lovely spot. But it was smokey, the kind of smokey that offered a beautiful but unnatural sunset. “Glacier’s pretty much closed,” the camp host told us. We spent that night with our windows and vents closed, worrying that it would be worse as we headed north toward Glacier National Park, and that our plans to see friends who were flying in from Georgia would be ruined. What kind of trip would they have if they couldn’t even breathe the air?

We spent an anxious next day driving north through raging winds, calling every few hours to check on conditions in and around Glacier. Most of the fires are contained and the main roads are open, we heard from the pre-recorded message on the park service line. “It’s clearer than it’s been in weeks,” said a woman from the Kalispell Chamber of Commerce, just outside of Glacier. And so it seemed as we pulled in for the night to Polson, MT, a town that sits on the pristine Flathead Lake just an hour south of the park. The air was clean and fresh and maybe for that reason we loved Polson and its quirky stores and restaurants. The town, which abuts the Flathead Reservation (Salish and Kootenai tribes), must thrive on seasonal tourists for it has a whole range of resort offerings (golf, fishing, spa) and other touristy items (huckleberries, cherries, wooden bears–we are still in search of the perfect wooden bear for the Woodebago).

Parts of Polson, where people from Polson probably live, weren’t all nice. A long walk took me to a strip of stores that boasted a casino, a bar, an ATM and the state child and family services office.

A clear day later, we arrived at Glacier, two days before our friends were due to arrive. Signs warned us that the park (and the state) were still under Extremely High fire alerts and Stage 2 fire restrictions (no open fires anywhere). The park still desperately needed wet and cold weather, the rangers told us. So we didn’t mind when, as if on cue, the air began to grow colder and the skies began to cloud over.

We went to a ranger talk called Glaciers 101, where we learned that glaciers are always moving (like conveyor belts underneath their top layer of ice) and that this movement scrapes against the mountains and creates silt that flows into the lakes below, giving them their unique tealish-blue color. The movement of glaciers over time also scoops out U shapes (instead of Vs) between the mountains and creates pointy “horn” mountains (one mountain is called Little Matterhorn).

We also took some drives, went on a bike ride, and skipped rocks on sparkling Lake McDonald. 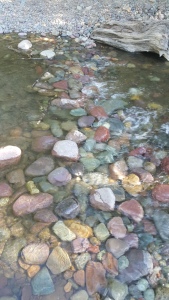 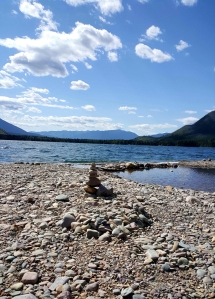 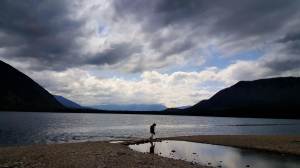 But we mostly waited for our friends. And, just as the park got its relief in rain, we got ours in the Millers. We left the park to join them in the cabin they had rented just minutes from Glacier’s West Entrance. Like a big stretch after a long, cramped ride, it was great to be able to spread ourselves and our things out in a real house. Mostly, though, it was wonderful to see good friends. Road therapy. Together, we went hiking, played by the lake, and drove the Going to the Sun Road to the east side of the park, where there was enough snow to build our first snowman of the year. And we just hung out, playing games with the kids, eating pie (huckleberry/peach was the favorite), strumming on the guitar, and talking and laughing about old times and new plans. It rained a lot, and even hailed a little during one of our hikes. But Glacier is gorgeous under any conditions, and even better with good company. 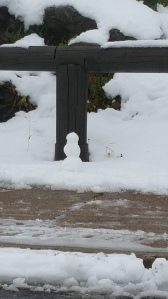 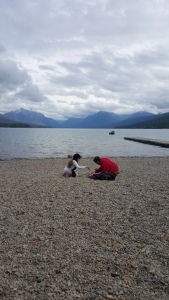 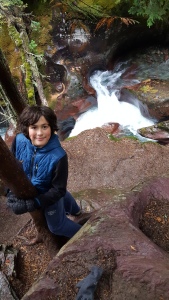 Glacier is also known for its great predators, one of the few places where grizzlies, mountain lions, wolves and other great carnivores live together. We hadn’t seen a single bear in our travels so far, so we were excited to spot both grizzlies (a mother and cub) and black bears, albeit from a distance. We saw only one up close, eating fish. 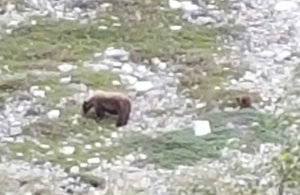 We never saw any big game near the cabin (just a few deer and some lively chipmunks). But we had the cutest little Darth Vader on hand, just in case. 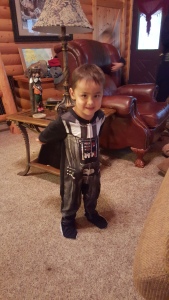 Now on to Idaho, where we will stay for a couple of days outside of Coeur d’ Alene (it took me five tries to spell that right) before heading to Spokane and then Seattle.

3 Responses to Glaciers, Millers, and Bears, Oh My!