San Joaquin, Mojave, and the Wilds of Arizona

The San Joaquin Valley is flush with vineyards, although they are nothing like the bucolic ones of Napa and Sonoma. This southern part of California’s central valley is a dry expanse of flat farms that line the highway with endless rows of vines. Fruit and nuts also grow here in what is called the “food basket of the world,” including walnuts, pistachios, almonds, garlic and oranges. But grapes are its biggest market, and a big part of its history. Driving through Delano, we quizzed the kids on Cesar Chavez. They knew only bits from books we’d read and stories they’d heard from their grandpa, but they remembered the movie we’d seen the year before and knew enough to listen closely to our impromptu lesson on the history of labor unions. Also, the UFW flag is evidently perfect for a minecraft build. 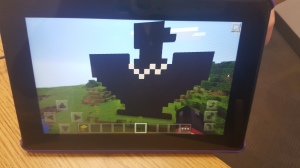 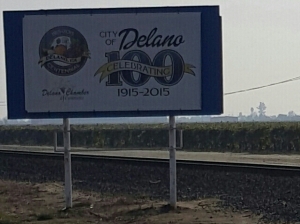 One night was enough in this valley, which has some of the worst air pollution in the country. We were glad to say goodbye to the smog and haze of Bakersfield. Driving out of the valley, where you can barely see the mountains in the distance, is like wiping a lens clean. 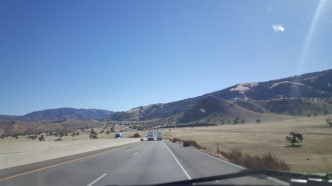 Many miles more and we reached the Mojave Desert, where the kids were fully impressed by the dusty, barren landscape. With its funny Joshua Trees and craggy sand-colored mountains, it looks like the Star Wars’ planet Tatooine, we agreed. For the next three nights, inspired by the desert surroundings, we huddled around our TV to watch the original trilogy (we are prepared for Episode VII!). 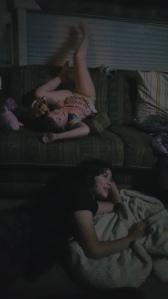 Arriving in Lake Havasu, Arizona was a relief after a full day’s drive. (We will be spending all of January in Arizona but opted to detour from California for a week to get to the Grand Canyon while we can, and then to Vegas for an exciting, if not homey, Thanksgiving).

Our site at Cattail Cove State Park is close to the lake, which is only warm enough for brave G, who always longs to swim. The campground is surrounded by mountains that change colors with the hours. Southwest sunsets never seem to disappoint. 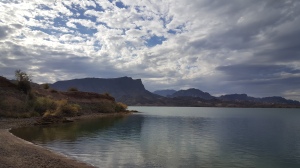 Cattail Cove is only about half-full of campers but it is overrun by quail. Faster than you’d believe (what do you call a fast waddle?), they zoom by with their silly little flapper-like feathered caps, jumping up to grab olives from the trees and making cooing and whooping noises. 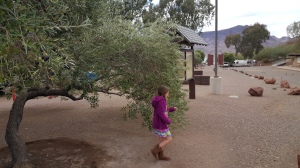 Coyotes and roadrunners are here too, although a lot bigger and smaller, respectively, than we imagined. Signs also warn of rattlesnakes. Although we haven’t seen any yet, I am on high alert. Jogging along the road, I see sticks for snakes, like a cat with a cucumber. 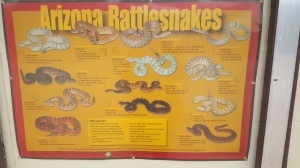 Odd for Arizona, we saw a day of rain. At first it was just an undecided sprinkle but it soon turned to a deluge, far more than this hard cracked terrain could handle. Like cardboard, the ground absorbed nothing. So sad, remarked G, that the desert is so thirsty but just can’t drink.

Weather advisories had been also calling for high winds but that night’s winds were more than we expected, and another reminder of how small and fragile we are in this vast desert. We were parked under a lovely desert willow, whose bendy branches blew gently in the day’s breeze. But in that night’s winds, those branches waved wildly, banging and scratching on the ‘bago. Either that or Freddy Krueger was on our roof, scraping his fingernails along our tin top. We lay awake most of the night, listening to chairs blowing over and waiting for a window to break. 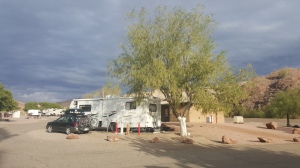 Dawn came with no damage, but for a few broken branches and leaves scattered about, and another perfectly sunny Arizona day. We spent the rest of our week here hiking about and driving into town to the Lake Havasu Public Library and Mojave Community College. We seem to have finally found a school schedule and pace that works for us, although we still test each other’s patience regularly and, on occasion, are drawn to the dark side. Such is life living together, 24/7, in tight quarters.

Tomorrow, we hit the road again, bound for the grandest canyon in the world! 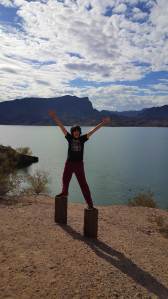 Out here on the road, trying to make the most of a year in close quarters with my three favorite people...
View all posts by Elena Silva →
This entry was posted in Uncategorized and tagged Arizona, Cattail Cove State Park, Delano, Lake Havasu, Mojave Desert, San Joaquin, UFW. Bookmark the permalink.

1 Response to San Joaquin, Mojave, and the Wilds of Arizona