Politics aside, Alabama feels like a red state. Red clover lines the roads and red clay dirt shows through the grass on the embankments. Crimson Tide flags hang from front porches, big and small.

We take side roads off the main highway to get to Monroeville, home of late authors Nelle Harper Lee and Truman Capote. 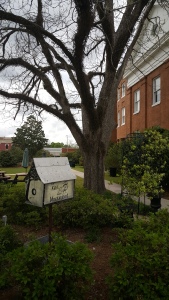 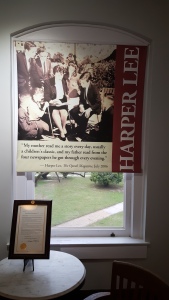 We start at the local library, as we often do, and are told to hurry over to the courthouse museum because it is due to close soon. The doors are locked in front but the side door opens into a hallway, where we are greeted by the museum’s director. We are closed, he tells us. But then hearing we are traveling from so far, and that the better half of us has been teaching To Kill A Mockingbird for 15 years, he turns on the lights and says we can look around. As it turns out, Nathan Carter is not just the museum director but also the grandson of Mary Ida Carter, the aunt that Truman Capote lived with here in Monroeville, where he began what would be a lifelong friendship with Nelle Harper Lee. Mr. Carter takes us upstairs to the courthouse and exhibit areas, enthusiastically telling stories about Capote and Lee (there is a new children’s book called Tru and Nelle about their childhood friendship), exchanging opinions (for years, we’ve been saying she only wrote one book but now how should we teach Go Set A Watchmen?), and providing what amounts to our own private tour of the place (he is planning a series of events for this year’s 50th anniversary of Capote’s In Cold Blood).

Along with the red, there is also a lot of green here in Alabama, especially in our Corps of Engineers campground. The campsites are spacious and set against a lake and plenty of trees. Heavy rain keeps us inside, which is fine since there also seem to be an abundance of creepy crawling and slithering things. The frogs and newts are cute but the spiders are really too big for us. 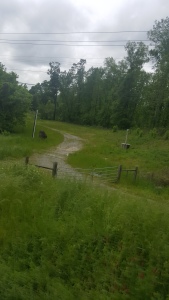 About twenty miles away is the city of Montgomery, which we visit to see the state capital building, the First White House of the Confederacy (Montgomery was the confederate capital before it moved to Richmond, VA), the Dexter Avenue King Memorial Baptist Church, and the Rosa Parks Museum and Library at Troy University. We spend most of our time at the latter, which has an unusual arrangement of exhibits in different parts of the building. Most are interactive, including the time machine bus in the children’s area that takes you back before the 1857 Dred Scott case, introducing Homer Plessy, Harriet Tubman, and others along the way to 1955, when Rosa Parks refused to give up her seat. Another section of the building takes you from 1955 to today. 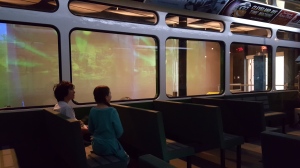 Tuskegee is our next stop, just an hour away and on our way east toward Georgia. The Tuskegee Airmen museum is free, a National Historic Site a few miles from Tuskegee University, which was founded in 1881 by Booker T. Washington. Its exhibits are split between the two original hangars where the first squadron of African American fighter pilots was trained in 1940 (the U.S. military wasn’t officially desegregated until 1948, although this was still notably before the desegregation of U.S. public schools). 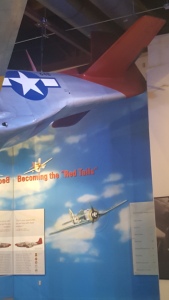 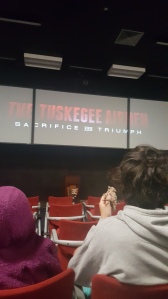 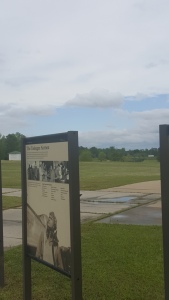 It’s raining as we leave Tuskegee. Just another hour before we cross into Georgia, and just one more day until we see our friends near the Georgia coast. We are all so excited to be back East!

Out here on the road, trying to make the most of a year in close quarters with my three favorite people...
View all posts by Elena Silva →
This entry was posted in Uncategorized and tagged Alabama, Corps of Engineers, Harper Lee, Monroeville, Montgomery Bus Boycott, Rosa Parks, Truman Capote. Bookmark the permalink.

2 Responses to Across Alabama