All the Great Lakes

We crossed back over from Ontario into Michigan on a rainy day. To get to the border station we had to follow a strange detour that seemed to want to send us to the Rednecks Saloon and Hard Wok Cafe (we passed on both).

There were no lines at the border and we were asked just a couple of very basic questions (where are you coming from, where are you headed). Seeing the D.C. birthplace on my passport, the border patrol officer asked if I was a politician. When I said no, he asked if my parents were politicians. We’re not sure what a yes might have meant for us but after another no we were granted passage from the Canadian Sault Ste Marie to the U.S. Sault Ste Marie (pronounced, at least on the Michigan side, “Soo Saint Marie” and named for the rapids of the St. Mary’s river). After pulling into our campsite, we went to a touristy restaurant, The Lockview, to try to the local whitefish. We’re not sure if it tasted great because it was delicious (it was a lot like tilapia) or because we hadn’t eaten at a restaurant for awhile. Either way, we enjoyed our dinner. Directly across the street is a viewing platform for the Soo Locks, which were built to allow tanker ships to navigate the 21-foot drop from Lake Superior to Lake Huron. Now managed by the Army Corps of Engineers, the Locks are impressive in size and task, filling with water to raise and lower enormous ships. 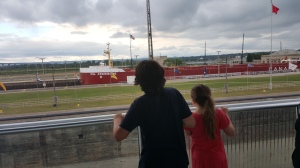 Our campsite, Aune Osborne, was right on the banks of the river so we got to watch more ships pass toward the locks late into the evening. No mosquitoes here in Michigan, although there were big weird bugs that the kids identified from Ranger Rick readings as mayflies (and assured us do not bite and live a short 24-hour life cycle). The mayflies were more interesting than bothersome, but they were everywhere! On the RV, in the RV, inside the awning track, even stuck in our hair. We expect to be finding their remains for weeks to come, poor things. 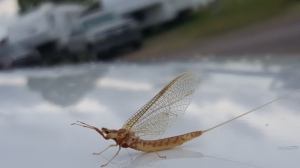 Other than that, the campsite was a lot like the others so far, a loop of mostly RV sites with mostly friendly people and a main building with restrooms and showers (with water and electric hookups, we don’t need these amenities but are learning to use them when we can–our shower is great, but tiny for tall people and always better to conserve). The site also had an old school playground that the kids loved. It had the kind of long metal slide that would have been too hot to touch if there had been hot sun and a rusty swingset that’s probably dangerous by today’s rubberized standards but G said sounded like musical notes with every push. In the morning, after coffee and a swing, we packed up for a day on Mackinac (“Mackinaw”) Island, a quaint island with grand houses, spectacular gardens and, on this day, a lovely cool breeze. It reminded us a little of Martha’s Vineyard although, unlike the Vineyard, this island allows no motorized vehicles. Bicycles of every kind are everywhere, competing only with pedestrians and horse-drawn carriages. We rode the 8-mile perimeter of the island, passing other tourists who stopped to take selfies on the rocky beaches and waving hello to those who rode along or past us in both directions. 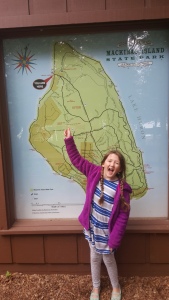 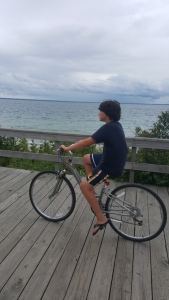 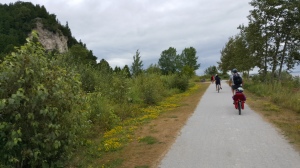 After our ride, we enjoyed the island’s famous fudge. We chose Murdick’s but there were at least a half dozen other fudge shops tucked in between t-shirt and memorabilia stores along the main street. Evidently, there was a Mackinac Island break-out fantasy romance starring a young Christopher Reeves, Somewhere in Time, so several stores were proudly displaying posters and mugs and VHS copies of the movie. We’d never heard of it, but have since decided it’s a must-see, if only to try to recognize sites from our visit. The movie can’t convey the smell of the main street, though, which we decided was a sweet but unpleasant combination of fudge, flowers, and horse manure.

The ferry returned us to Ignace, MI, a town that we will remember mostly for Bentley’s Cafe. Like stepping back in time, or possibly just far enough into the midwest, Bentley’s had that Americana feel to it, with fresh pies sitting on the window sill and bright yellow and red bar stools, low enough for the kids to twirl around and around until we forced them to stop. We bought an apple pie for the next day’s breakfast as well as one of the local “pasties” (past-ee) we’d heard about from our campground neighbor. These dense and doughy meat and potato dumplings were originally made by the wives of miners who needed the hearty high-calorie meal to make it through their long work shifts. We hardly needed them but they were delicious! 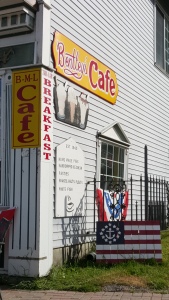 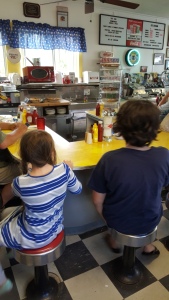 Now we are headed down Lake Michigan, the last on our Great Lakes tour (up Erie, on Ontario, along Huron, over to Superior and now down Michigan). The weather so far, except for the showers re-entering the U.S., has been perfect, nearing 70 degrees each day and mostly sunny. There are big, puffy white clouds that hang low in the horizon as we whiz past pine forests, birch trees, and fruit farms, stopping only for some cherries and corn at a farmstand along the way. We are lucky with the weather and our timing, since we are hearing about a tremendous storm that just passed through Traverse City, MI and Sleeping Bear Dunes National Lakeshore, our next stop. Assuming the campground is open, we will be there for three days before heading further south to South Bend and then west to Ames, Iowa.

2 Responses to All the Great Lakes