One thousand miles into bigtrip, we drove through Traverse City, MI and into Sleeping Bear Dunes National Lakeshore to find power lines down and massive trees splintered along the road sides. Local residents were gathered in their yards, some picking up and piling debris and others just standing around looking bewildered. The storm, which wasn’t categorized as a tornado but swept through just as quickly with winds as strong as 100 mph, felled thousands of trees and devastated parts of the Sleeping Bear Dunes park. We weren’t sure if the road to our campground would even be passable and, if we reached it, whether our spot would still be available. We were in luck on both counts. Platte River campground had barely been touched, and we pulled in on a day that was as beautiful as it could be. 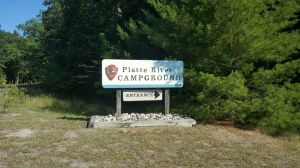 We took a short hike from our campsite to the shores of Lake Michigan, which seemed like the ocean to us except for its coolness and the missing salt and sea creatures. The water back home must be summer-warm by now, and we wondered if the jelly-fish are out yet in the Chesapeake Bay. Maryland beaches are longer and wider than these but there are no enormous dunes and bluffs like the ones here. Two weeks into bigtrip, the kids have become practiced at saying “wow” whenever one of us points out the window and says “look at that!” They know that no response could trigger a lecture about the importance of seeing everything around them, of not missing that barn, that storm cloud, that lake, those cherry trees, that bend in the road. To be fair, there are a lot of these same sights but we point them all out anyway and make them at least mumble a wow.

But the dunes of Michigan warranted a real wow from all of us. The namesake of the park, Sleeping Bear, is the largest of the dunes and sits high above the shore. The dune is named for the Ashinaabek Indian legend that tells of a mother bear who once swam from what is now the Wisconsin shore with her two cubs to escape a raging fire. The mama bear laid down on the Michigan shore to await her cubs, who never made it and are said to be the two Manitou Islands that sit just off shore. We heard the legend and saw gorgeous dunes but never actually made it to the famous main dune. The storm had shut down many of the areas, including the trail to Sleeping Bear. 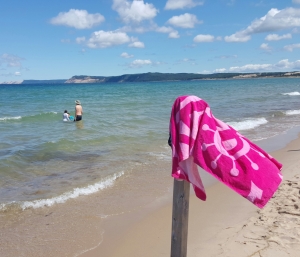 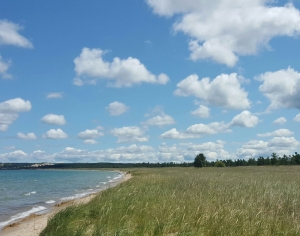 We were fine with that, happy to just settle in at the campsite and do nothing. Relieved to have missed such a violent storm, knowing we didn’t have to pack up the Woodebago for three days, and trusting that we were safe and secure among these trees, we could finally let go and fully relax. We got out the books, played card games and even the guitar made a short campfire debut. And we slept deeply. There’s something about a journey like this, each day with exhilarating potential (what wildlife will we see, where will we sleep, what if we get stuck?!) and yet the sameness of everyday parenting (brush your teeth, don’t hit your sister, turn off your Kindle, look at that!), that makes you just want to sleep. So we loved Sleeping Bear for its legend and its dunes and its wooded campgrounds but also for the long deep sleep it gave us.

The one thing on our Sleeping Bear itinerary was to visit a friend’s parents, who graciously drove to meet us and give us a tour of their family farm. The 200-acre Bufka farm is now owned by the National Park Service (part of the Sleeping Bear Dunes National Lakeshore) but we got to hear first-hand from Norb and Sue Bufka about the early history of the land and the family that lived here (Norb has researched and published numerous books about the region, and other topics, which he generously shared with us). 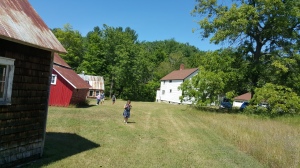 The Bufka’s also treated us to a quart of local maple syrup, which resulted in an easy, delicious and filling pancake dinner that night. Again, we slept deeply, snoring like bears.

We hoped to stay an extra night but the campground was full. So we packed up and headed south along Lake Michigan, stopping for one more thrill in the dunes: Mac Wood’s Dune Ride. The dune buggy, going nearly 40 miles an hour through the sand, is like riding a roller coaster. We stopped to look at the remains of old trees, one with a hole shaped like Michigan’s mitten, and then at the top of the highest dune. Half of us ran down, half of us stayed at the top. 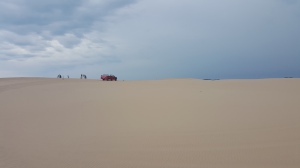 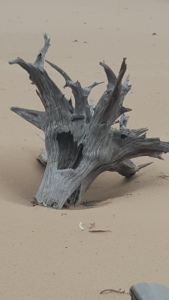 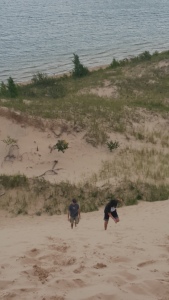 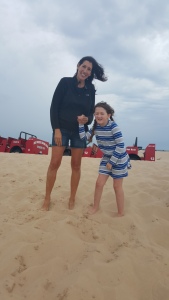 Sandy and wet (it had started to rain), we buckled back in to drive through our last day in Michigan. And so begins Leg 2, as we head do 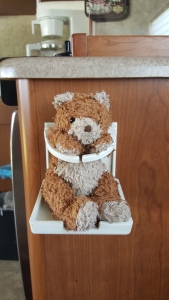 wn to Indiana, across Illinois, Iowa and then Nebraska…