Living for Real in Roswell

Did you think we had been abducted? No, we are alive and well here in Roswell, New Mexico, although little green men are all over, poking their heads above signs, decorating doorways, and glowing in the night. The town’s celebration of the 1947 crash is everywhere, part kitschy tourism– keychains, mugs, and bumper stickers (“Believe!” and “UFOs are real! The Air Force Doesn’t Exist“)–and part true believers, convinced there was a cover-up and awaiting a second coming. Main Street is lined with alien-themed gift shops and museums, including the International UFO Museum and Research Center (the research center was closed during our visit but RALF–Roswell Alien Life Form–was there to greet us). Even the public library and the local McDonalds have alien décor. 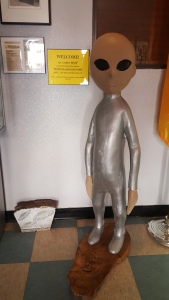 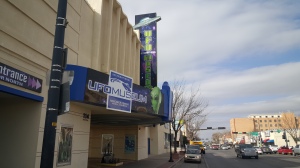 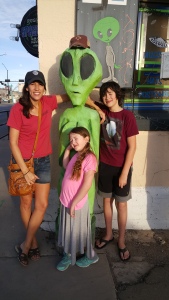 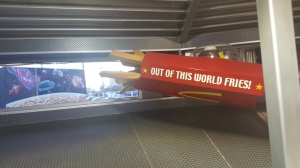 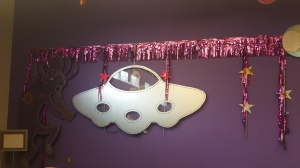 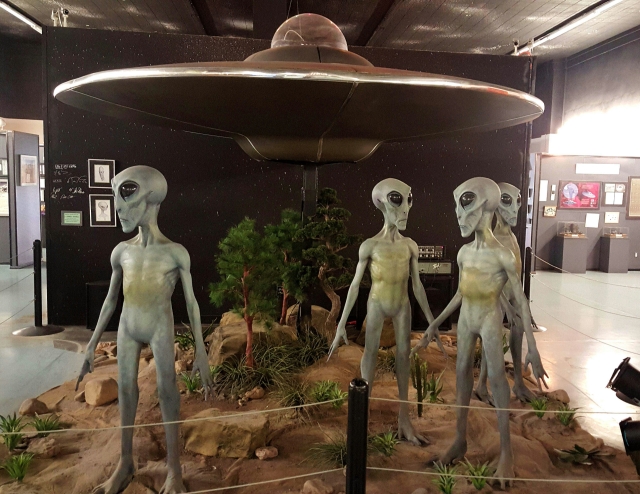 The biggest industries in Roswell, however, have nothing to do with UFOs or the once-booming air force, which closed its base in 1967. The town now survives on petroleum production and distribution and off of its hundreds of alfafa, pecan and dairy farms. (Drawing from the latter, Leprino Foods operates one of the world’s largest mozzarella factories here, although the cheese is shipped off to Pizza Huts and other big food service groups). There’s also the New Mexico Military Institute, a state-run junior college, and a branch of Eastern New Mexico University, as well as a few nice outdoor parks, including  Bottomless Lake State Park, Bitter Lake Wildlife Refuge and a free local zoo. 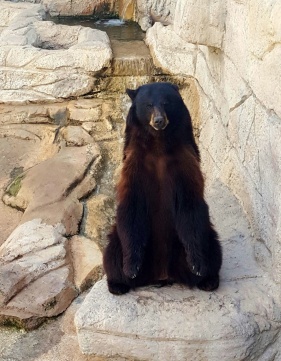 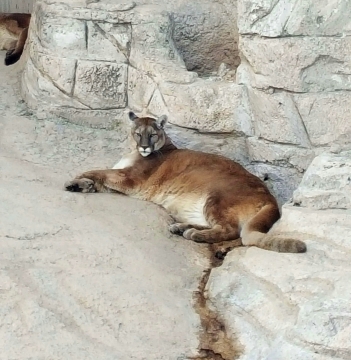 Otherwise, there’s not much going on here. Here in the eastern part of the state, we are far from mountains and valleys and are closer instead to the Texas plains. We chose Roswell for this reason, and because we were able to find a very inexpensive house to stay for two weeks.

The house we rented is a sweet little place, with two nicely furnished bedrooms, two full bathrooms, a big living room with comfy couches, a kitchen stocked with pots and pans and new appliances, and a washer and dryer. Little aliens are creatively staged throughout the house and out back, where there’s a yard of yellow scratchy grass–nothing will be green here until spring–and a hammock that swings in the dusty winds. We’ve been baking, cooking, reading, watching movies and doing as much online learning as we can while we have Internet. We even made a BigTrip Peep Diorama! During the first week, the kids got some sort of stomach bug (pre-Peeps), which was too bad but really couldn’t have been better timing. Here, we have extra beds and linens, showers, laundry and plenty of water to wash away all that needed to be washed away that week. 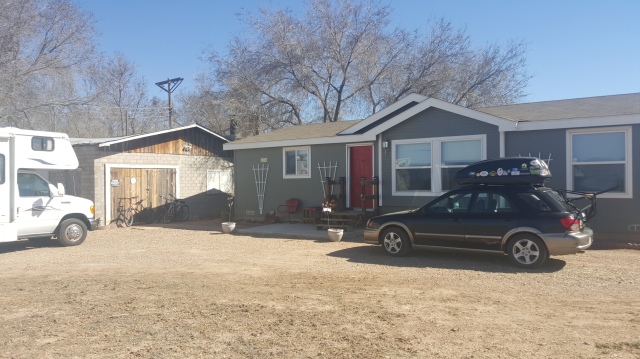 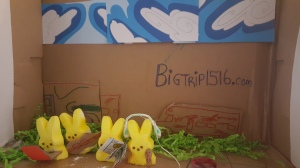 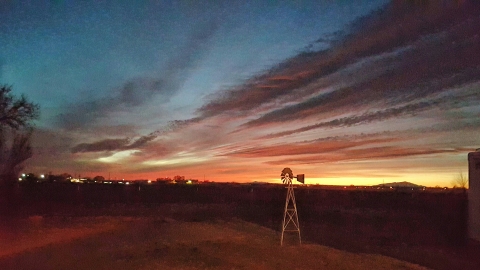 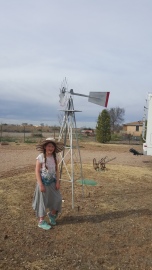 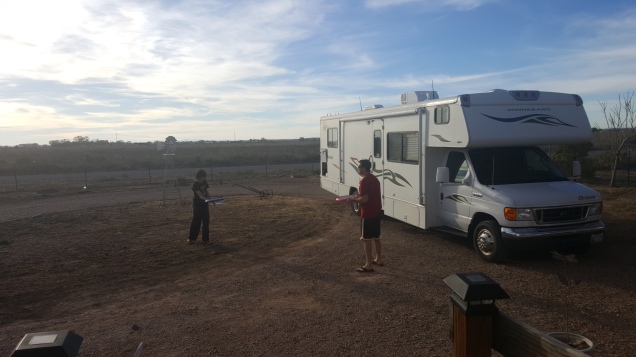 All in all, we’ve loved this little house and the chance to experience a slice of life in Roswell. Our early talks about aliens and UFOs gave way quickly to more serious discussions about the realities of life here in this town, far away from the charm and beauty of places like Santa Fe.

Our surrounding neighborhood is poor, poorer than we’ve seen so far on this trip. Only a few of the homes are actual houses; most are trailers, old RVs, or combinations pieced together with extra 2x4s and siding. Tires hold down tin roofs, old cars and plastic toys are piled in the yards, and the smell of trash burning is nearly constant. The trailer next to us has three windows that are boarded up and one covered with plastic; we can’t tell if anyone actually lives there, except for the 4 or 5 dogs in the yard. Dogs and cats are outside in the roads all of the time. Many are feral but it is the fenced ones that furiously bark to protect their territory (I am most scared of Pablo, the 8lb Chihuahua mix a block down, who escapes and give chase, his owner waving and yelling “run, he bites!”). We’ve seen some neighbors, a couple walking across a littered field to the bus stop, a young woman holding her baby as she shoos a puppy from the porch, and of course the old lady who owns Pablo. Mostly, though, people stay inside so we’ve made none of the neighbor friends we initially anticipated. And we don’t have the foggiest idea what it would be like to really live here all the time, except to say that it would be difficult and depressing. Being here is eye-opening for all of us, but especially for the kids who want to know how did it get this way? why is there trash everywhere? why don’t people just fix things? 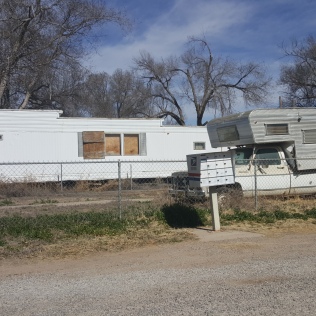 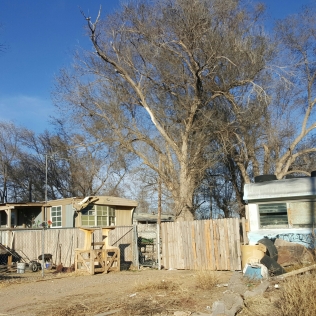 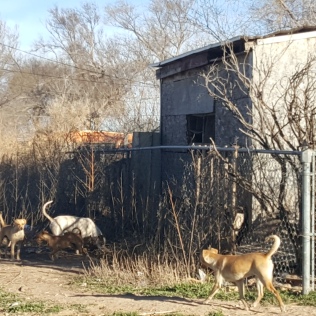 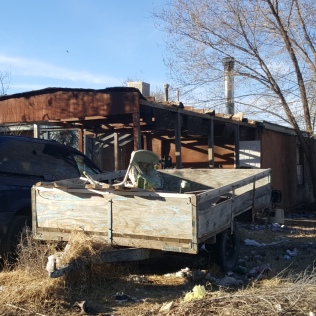 Good questions and, while we have strong opinions, we want the kids to wonder for themselves. For all of the national parks and beautiful cities, we know seeing the country means seeing this too. So we head, humbled, into the next month, to see if BigTrip is big enough for the great state of Texas.

Out here on the road, trying to make the most of a year in close quarters with my three favorite people...
View all posts by Elena Silva →
This entry was posted in Uncategorized and tagged New Mexico, Roswell, UFOs. Bookmark the permalink.