Hi from Elian and Gg! We do not want to write formally but mom and dad said we had to so here we are. We are in West Texas seeing so much. We camped in the Davis Mountains and drove out one day to see the Marfa lights. They were amazing. They were red, yellow, orange, blue and white. They flickered and flashed, like someone turning on and off a flashlight that changed colors. There were free viewing binoculars! No one knows what they actually are, but there are some theories. Some people say they are little volcanoes, or gas formed into large balls, which somehow ignite, or reflections of the moon and stars on the rocks, or jackrabbits with glowworms on their fur, or swamp gas. In the middle of the desert. Swamp gas. They would split apart and come together, changing colors all the while. It was so cool! We wish you could have seen it. We could not get a picture, but if we could, it would not do it justice. They stunned us. On and off, again and again! Sometimes they would split. One into two, two into four, and then they would disappear. Amazing! It was night when we saw them, so after a while, we went home.

The next day, we went to the McDonald observatory, which is not a McDonald’s. On the way there, we saw a small pack of Javelinas! When we got to the observatory, mom and dad bought us guided tour tickets. We watched a man do a cool PowerPoint, and then followed him to the shuttle, where we boarded, and went to a giant telescope, where we went inside. When we got up there, he showed us the telescope. It was huge! He showed us a green line, which we could not cross, for safety reasons. We wondered why, but then he showed us. He picked up a remote-ish thing, and held down a button, which raised the floor! That was definitely dangerous, because if someone’s foot were stuck under there, it would be crushed! Then he talked about the telescope, which got somewhat boring. Then he asked if any one wanted to drive the telescope, and he picked a man standing near us. He gave him the remote-ish thing, and told the man what to do, and the telescope moved! It swung slowly, and then the guide told the man to stop. Then he asked us if we wanted to! Elian turned the telescope, and Gg moved the roof (400 tons)! Then we left, got on the shuttle, and went to another telescope. 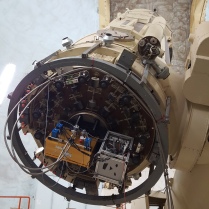 This telescope was bigger. You could not go near the actual telescope, but this one looked nothing like a telescope anyway. It looked like a mess of pipes and machinery. The reason we could not go in is that they were fixing it. When we left, we ate lunch, and then went to our car. We took a scenic drive home and we are glad we did. We saw two more packs of Javelinas! We saw a pack running down a mountain, and then we saw a pack near, well, nothing. It was cool. We learned from the camp host, Jerry, that the females and babies do not have tusks and that a group of Javelinas is called a squadron! He also told us that they look like pigs but are more closely related to hippopotamuses. 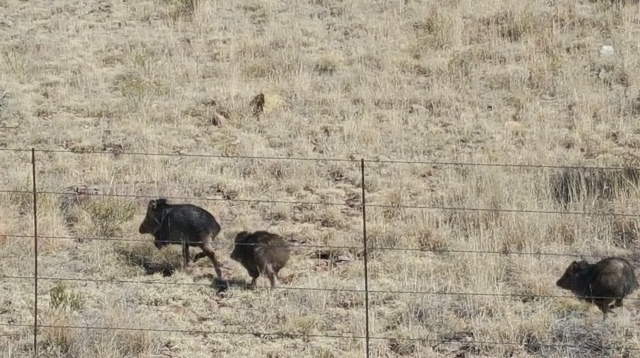 Now, we are in a little town called Lajitas. Guess who the mayor is? He’s a…goat! His name is Clay Henry and the people elected him. He has two assistants that are also goats. He also has a manager that is a dog.

Today, we went to Big Bend National Park. We went to Mexico by crossing the Rio Grande on foot (it wasn’t so grand in that place). Nearby, there was some really, really sticky mud that Elian got his shoe stuck in.(It’s really weird to be writing this because we are talking about ourselves!) Anyway, the shoe survived but it will never be completly clean again. Big Bend got its name because the Rio Grande makes a huge turn before opening up into one of the canyons, which is actually called Santa Elena Canyon (Saint Elena Canyon). Big Bend is very nice. It has many lovely flowers that are purple, yellow, and white. The landscape is very dry but things really flourish here. There are green trees, cacti, flowers and countless animals and birds. Actually, there are more than 450 species of birds in the park. A type of black bear was completely annihilated in Texas, and the only population retreated to Mexico, hence their name the Mexican Black Bear. When Big Bend was created in 1944 (six days after D-day, when the Americans invaded Normandy), the black bears came back to Texas in the safe, habitable area of Big Bend National Park. Another great animal in Big Bend is the mountain lion, which is powerful and can jump up to 40 feet. There are currently 23 in the park but we didn’t see any. 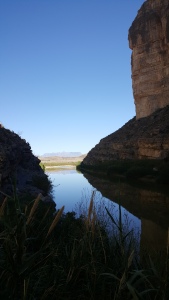 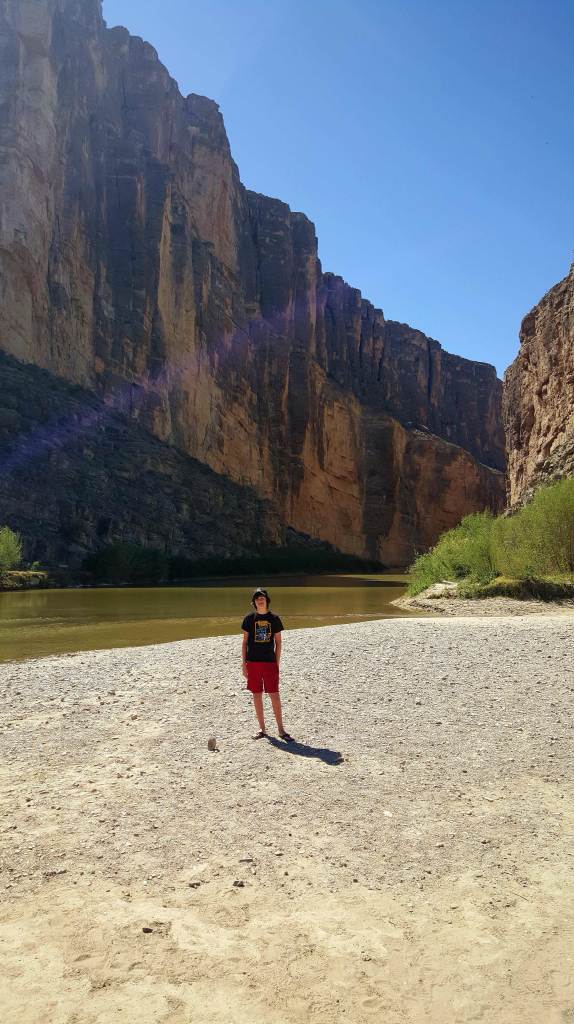 Riley, we miss you and can’t wait to see you in less than 3 weeks! Well, we had better wrap it up. Your eyes are probably getting tired.

Out here on the road, trying to make the most of a year in close quarters with my three favorite people...
View all posts by Elena Silva →
This entry was posted in Uncategorized and tagged Big Bend National Park, Davis Mountains State Park, Lajitas, Marfa Lights, McDonald Observatory, Texas. Bookmark the permalink.

5 Responses to Letter from West Texas